The important June 1 reinsurance renewals have gone ahead in some of the world’s largest food markets including China, India, South Korea and Thailand.

They came against the backdrop of some serious market disruption including African swine fever, Covid-19 and government intervention.

InsuranceAsia News (IAN): How did the June renewals proceed and how have terms been impacted?

Yu Deng, Canopius: The June 1 renewal for agricultural reinsurance in key markets in Asia coincides with land preparation and crop seeding activities. These primary industry operations have been largely exempt from lockdown restrictions in the vast rural areas in countries like China, India and Thailand, who are among the largest staple food producers in the world.

Despite foreseeable economic challenges, government budgets have been put in place to continue defraying the cost of agricultural insurance premium. While it’s reassuring news that the insurable interest and gross premium for the agricultural insurance sector are expected to be stable, much of the primary insurance operations have adapted to a more focused approach to tackle issues accumulated from previous rapid growth.

For example, widening of rider benefits, such as prevented sowing, post-harvest crop storage, voluntary coverage buy-ups and double indemnification of government ordered slaughter due to animal disease have dented P/Ls of insurers for lack of historical data to price for such risks.

Furthermore, such approaches have provided wrong incentives for policyholders to exploit deficiencies in product design, ex post. As a result, we have seen several corrective measures put in place in this renewal period, together with a rationalisation of reinsurance terms.

This has included additional risk rate loadings, tightening of sub-limits, policy sales windows and wordings, and the establishment of more field teams to service large groups of policyholders, enhancing self-sustainability and product satisfaction for agricultural insurance. It’s estimated that these corrective measures will trickle down and have a positive effect in the next reinsurance renewal.

IAN: Has capacity been returning to the market and what needs to change?

Stephane Baldonoff, Lockton: In China, there were encouraging signs of capacity returning during the recent renewal period, however terms and conditions tightened across the board, in particular for livestock coverage due to ongoing concerns with African swine fever (ASF).

Reinsurers continue to support China’s long-term commitment to the agriculture industry, but underpinning future risk transfer solutions will be the need for insurers to focus on the management of losses and developing value add services to farmers. Interest in parametric coverage solutions featured frequently during renewal discussions and are viewed as sound alternatives to traditional agriculture insurance covers.

The South Korean renewal season was difficult with uncertainty around the government’s continued support. 2019 showed a continued trend of poor performance resulting in no improvements in renewal terms. South Korea remains an attractive geography for reinsurers, but more work is needed to overcome issues relating to data and profitability and over the long term to find a more equitable structure for reinsurers to remain involved.

Meanwhile, most Indian insurers successfully renewed their treaties, with reinsurers generally satisfied in renewing with their existing partners. Once again, the domestic market was heavily reliant on support from GIC Re, but this dependency will come under pressure in the future, as both the government and GIC Re will look to Indian insurers to become more self-reliant. This will result in the need for Indian insurers improving — portfolio management, and data and loss management procedures.

Ambitions for the government’s Pradhan Mantri Fasal Bima Yojana (PMFBY) scheme remain high with growing expectations for more farmers to be enrolled. Going forward Indian insurers will be challenged by the government to reduce rates and this can only be accommodated through greater underwriting control and by developing a better understanding of the weather extremes on the agriculture industry.

IAN: What have been some of the key market drivers and how will it move forward?

David Gregori, Willis Re: The world has suffered from Covid-19 but its direct impact on agriculture is anticipated to be moderate during the northern hemisphere sowing season, and with very limited consequences on loss adjustments here in Asia.

Yet in 2019, the outbreak of the ASF has affected pork production in China with a record shortfall. Although that has posed a challenge for insurers during last year’s renewal, it is partly responsible for the improvement of the reinsurance terms this year. Crops and forestry are usually placed within the same treaty as a source of diversification.

Reinsurers’ appetite will remain as one of the major drivers of the cost of reinsurance, coupled with the unknown impact of a new nationwide Chinese Agriculture Reinsurance company that is being set-up.

In India, recent changes in the national crop insurance scheme, PMFBY, have first led to concerns and an early market gross net premium income (GNPI) decrease at an estimate close to 25%. We see an unusual renewal with capacity shifts and the best performing insurance firms heavily over placed. However, the Indian crop retro market is performing well for the fourth year in a row.

The concern has now shifted to the departures of some Indian states from the PMFBY scheme which raises issues of its sustainability.

Looking forward, there is a high chance of an ENSO-neutral condition in the northern hemisphere, resulting with fewer storms in East Asia and a wetter India this year.

Furthermore, China’s 2020 Agri GNPI should exceed US$10 billion. It’s also likely that there will be a focus on wording exclusions due to the recent epidemics at the next renewal.

Share Article
MORE FROM: Market View
Partner Content
Join the mailing list Receive our regular newsletter, a round-up of the latest news and insights direct to your inbox, and designed to help you stay ahead.
Partner Video 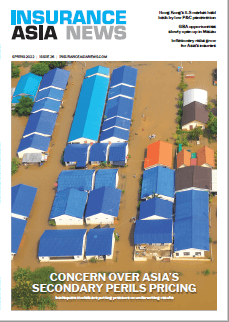