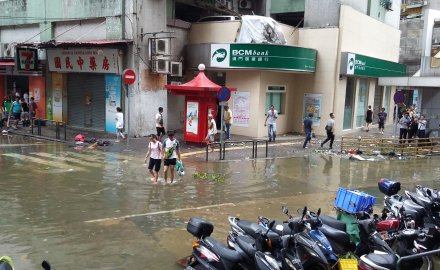 Typhoon Hato in late August 2017 was a serious wake-up to the Macau government and the insurance market.

It was the most powerful storm in 50 years to reach the Special Administrative Region and was a direct hit to boot.

There was serious water damage to underground car parks, casinos, SMEs and, in particular, low-lying seafront areas. The situation was so bad – that for the first time in history – over 1000 soldiers from the Macau garrison of the Chinese People Liberation army came out to help the clean-up.

Sadly there were also 24 fatalities.

The direct economic losses on the city were P9.04 billion (US$1.13 billion); with insurance losses around P4 billion (US$500 million) – the most serious loss in Macau’s history. The repair bill was for damage to cars, property and business interruption.

While larger firms such as casinos have been historically well protected by insurance, the SMEs were not prepared for such a storm and as a result the government.

The government has decided to act by offering protection for the SME community. The Monetary Authority of Macau has teamed up with five insurers: Asia Insurance, China Taiping (Macau), Delta Asia, Fidelidade and Luen Fung Hang; and also brought in Taiping Re – which has a long history in the country – as the only reinsurer for the programme.

The scheme is for large disaster property insurance for SMEs providing coverage for commercial property damage caused during a typhoon warning signal number 8 or higher or during a storm surge which has a ‘red or higher’ alert.

To assist SMEs, the Monetary Authority of Macau, with the help of the Industrial Development and Marketing Fund, will cover half or up to P30,000 of the premium amount – whichever is lower.

The scheme, which started on August 1, is a pilot until December 31 and the decision for its continuity will be based upon the operations and claims registered in the first year.

Dr. Vong Lap Fong, a member of the board of directors of the Monetary Authority of Macau, said the major disaster insurance scheme is one of the ten important tasks of the government in disaster prevention and reduction, and is part of the policy objective set out in the government action lines for the financial year 2019/20.

Overall risk management has improved in Macau and during Typhoon Mangkhut last year the casinos were closed, windows were protected, sandbags were used and an emergency disaster prevention team liaised with the public. Although the storm was not a direct hit, the overall impact was far less than it could have been.

It seems Macau’s government is finally waking up to the twin importance of risk resilience and insurance; it will be interesting to see how popular the SME coverage is and how successful it is in the event of a storm.