What to expect if El Niño transitions to La Niña in 2016? About one year ago in June 2015, there was wide concern of a strong El Niño that would eventually become one of the strongest in history. Since then, we have witnessed severe droughts in Korea and Philippines, heatwaves in India and Pakistan, huge forest fires in Indonesia and multiple heavy rainstorms in southern China, and other severe weather conditions in the Asia Pacific region during the past 10 months. The 2015 tropical cyclone season also brought one of the most active period on record for the North Pacific Basin, with several impactful landfalls affecting interests in the West Pacific. Now, in May 2016, it is clear that this El Niño event is weakening. According to the National Oceanic and Atmospheric Administration (NOAA), the current El Niño has a good chance of transitioning to the La Niña phase, perhaps within six months.

What are EI Niño and La Niña?

Figure 1 indicates how ENSO events are classified based on the ONI. The sustained negative values of the ONI below −0.5°C indicate a La Niña event, while sustained positive values above +0.5°C indicate an El Niño event. To use a rough analogy, ENSO may be compared to bull and bear stock markets. The two types of market condition transition to each other periodically, as do El Niño and La Niña. The time period for a full ENSO cycle is generally three to six years.

According to the average of an ensemble of dynamic models, it is projected that the three-month average of the ONI will drop below -0.5°C, indicating La Nina conditions.

If a La Niña is in store, what should we expect?

While there are countless possibilities in any season, this article focuses on the more likely scenarios.

In contrast, during El Niño, a shift in circulation patterns over the tropical Pacific Ocean brings reduced rainfall over Indonesia, Malaysia and Australia. At the same time, an associated low pressure over the Indian Ocean typically brings dry air from Central Asia, with abnormally dry conditions to India during the monsoon season.

Guy Carpenter classified each historical year from 1960 to 2015 as La Niña, El Niño or Neutral using SOI data from NOAA and mapped disaster records from the International Disaster Database. Based on this classification, the frequency of droughts and wildfires in La Niña years is lower than neutral years and significantly lower than that in El Niño years.

On the other hand, increased rainfall in La Nina years should result in more flooding. The combined Malaysia, Indonesia, Philippines, Vietnam, Cambodia, Thailand, Laos and Fiji annual flood frequency is 9.4 in La Niña years, higher than 7.3 of neutral years, and 7.9 of El Niño years. Based on loss data from the Insurance Council Australia, the annual loss during La Niña periods is approximately double the annual losses during Neutral and El Niño periods. This is largely due to increased losses from tropical cyclone and flood events.

In summary, based on historical experience, drought and wildfire conditions are likely to be suppressed in South-East Asia and Australia as a result of increased rainfall. However, the increased rainfall results in a higher likelihood of flooding in the above regions. In terms of tropical cyclone activity, the number of landfalls is likely to be suppressed in Japan because of the genesis location shift related to La Niña. However, in lower- latitude Asian regions, the relation between La Niña and tropical cyclones is more complicated and less obvious. 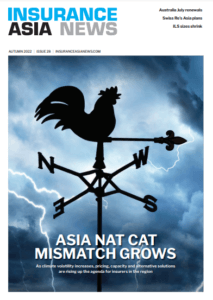