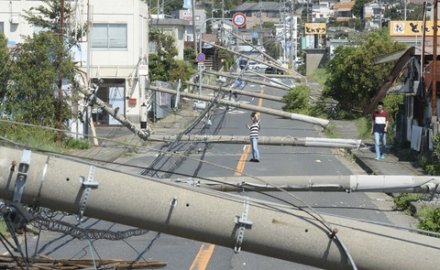 The costs to the market of Typhoon Jebi continue to rise. From initially being in the low billions relatively soon after the storm, the latest estimate from affected Bermuda-based (re)insurer Arch Capital Group’s chief executive Marc Grandisson is a potentially huge US$13 billion.

Grandisson argued the figure could be reached when the full cost of the business interruption and contingent exposures are counted.

The category 5 super typhoon made landfall in Japan in early September and was the strongest to hit Japan since Typhoon Yancy in 1993. The Kansai region was particularly affected with its major international airport closing because of flooding; Osaka saw a record storm surge of 3.29m with winds over 171km/hr in the city’s financial district.

Arch Capital reported a 61.9% drop in underwriting income for its reinsurance division to US$20.9 million during the first quarter of 2019, partly driven by US$16 million of loss creep from Typhoon Jebi.

Swiss Re said: “[The] results reflected the significant impact from prior-year events, with the vast majority being driven by the increase in the loss estimate for Typhoon Jebi, in line with a material increase in the total market loss.”

In addition to Jebi’s loss creep Swiss Re paid out US$210 million in Q1 for the North Queensland floods in Townsville and around US$90 million from the deadly Ethiopian Airlines crash (on March 10) and the subsequent grounding of the Boeing 737-Max fleet.

While Swiss Re Corporate Solutions made a loss of US$55 million compared with a profit of US$41 million in Q1 2018 (a review of the business is in progress), a major positive for the group is that its life and health reinsurance business continued to perform strongly — net profit climbed from U$201 million (Q1 2018) to US$328 million.

On the plus side it saw strong January renewals and overall P&C income climbed 16.1% to €1.72 billion.

Although it isn’t specified, Berkshire Hathaway’s Q1 2019 P&C US$40 million underwriting loss is also likely to have included loss creep from Jebi; Munich Re will post first quarter results later this week (on May 8).

While there has been some rate increases in Japan as a result of last year’s nat cats, Willis Re’s 1st View Renewals Report noted: “[Renewal rate] levels were lower than some reinsurers expected. Rate increases have been suppressed by capacity dynamics, as well as the economics behind overall reinsurer relationships with buyers.”

2018 was a dramatic year for Japan and a repeat of the losses are not expected for some time to come. However, by warming our seas and oceans, human-induced climate change is fuelling stronger, longer storms and another typhoon of similar strength to Jebi cannot be ruled out in the near future.