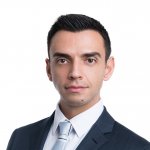 The impact of improving cancer rates on critical illness pricing

Pricing critical illness (CI) insurance necessitates a view of the future, informed by trends in past disease incidence rates. One of the main CI conditions is cancer. Examples from Asia show that population incidence rates for some of the most prevalent cancers have notably improved in recent years.

Not incorporating this short- to medium-term experience in CI trend assumptions could lead to a sizeable over-estimation of future claim costs, and therefore to overpricing.

As shown in Figure One and Figure Two (see below) incidence rates for many of the most prevalent male cancers have improved, or continued to improve, after 2011 (most notably for colon and stomach cancer). A shift in incidence rates was also observed in Japan in 2011.

Colon cancer incidence deteriorated at a rate of 5.9% for more than 10 years and then improved at a trend of minus 5% since 2011. Incidence trends based on data from 1999-2011 would therefore be more pessimistic than those calculated on data from 2011-2016. For a male non-smoker aged 45, incidence trends based on 1999-2011 data would potentially overestimate the present value of future claims by 37% for stomach cancer and 120% for colon cancer.

This has a significant impact on CI pricing. For example, for South Korea, for all male cancers – an assumed arbitrary worsening trend of 1.5% instead of an improving trend of minus 2.6% for 10 years, which potentially overstates the current value of claims by 18%. A book of business/treaty last priced in 2011 could have been overpriced by 18%. 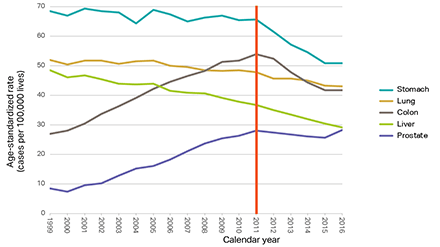 Will the trend continue?
Despite the observed improvements in stomach and colon cancer in South Korea, 2016 (the most recent year) data indicates a flattening. Although only one year, several risk factors indicate that improvement will continue in the short to medium term (next five to 10 years), but is likely to flatten in the long term. Factors include: 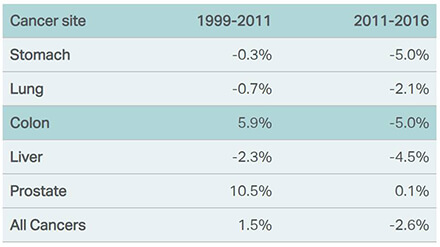 It is recommended therefore that short- to medium-term trending for countries where data is available should be guided (but not dictated) by relevant, recent historic experience. This can then be blended into a long-term trend assumption that the pricing actuary considers reasonable given not just incidence data but all relevant risk factors including medical developments, lifestyle changes and screening programs.

This article is written by CJ Sadler who is a senior pricing actuary life and health at PartnerRe; he is based in Hong Kong.