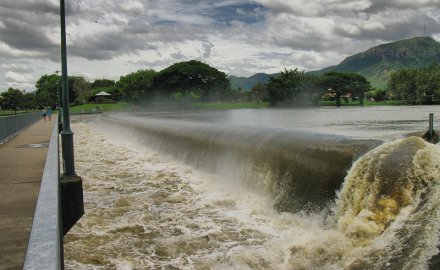 But the stakes are higher this year as the country faces its worst floods in 30 years.

The southern regions in mid-June were the first to be hit by torrential rainfall leading to severe flooding. As of July 20, 140 people have been killed and at least 28,000 homes destroyed. Around 38 million country-wide are affected.

Direct economic losses have already reached Rmb70 billion (US$10 billion), with the bill still climbing as the rainy season continues. These floods have already made Aon’s list of most expensive weather events for 2020.

Intense flooding is not new to China — they cause an annual average of US$10 billion in direct economic losses.

It was the ‘Grand Floods of 1998’ – China’s worst in 44 years – which served as a catalyst for the introduction of international reinsurance markets as a solution to flood losses.

With this in mind, how is China preparing for one of the country’s most significant and reoccurring extreme weather peril?

Collaboration and progress
Flood insurance is not yet prevalent in China, with the state taking on most of the burden.

The complexity and scale needed for flood risk protection however, requires collaboration from all stakeholders.

“With such a grand target, there is no doubt [that one] single party – including the government – will be able to achieve this alone,” Qin Lu, Aon’s China chief executive, told InsuranceAsia News (IAN).

There have been several massive flood events in contemporary China. But it was the ‘Grand Floods of 1998’ – China’s worst in 44 years – which served as a catalyst for the introduction of international reinsurance markets as a solution to flood losses, notes Lu.

A July Fitch report adds that flood risks poses threats to Chinese insurers’ financial viability, although the penetration rate for catastrophe coverage is not high. Flood and catastrophe risks are managed through “active monitoring of risk accumulation and reinsurance protection.”

Since 2014, the government has experimented with catastrophe protection schemes to supplement the commercial market. The flood cover included loss of life to personal injury, property and infrastructure damage, and crop and agricultural losses. Such programmes were established in Zhejiang, Yunnan, Guangdong and Heilongjiang.

“In China, as in other countries, it’s often the digital terrain modelling (DTM) that limits the accuracy that can be achieved. Flood modelling is always difficult — and any model is only as good as its weakest component.” Iain Reynolds, Peak Re

“From the first pilot programme in Shenzhen, the private sector (commercial insurers, brokers) participated in the design, structure, underwriting and subsequently ceded to the global reinsurance market,” said Lu.

But there is still a long way to go.

The right system
The right model for China is still in development. The state looks to create a “comprehensive multi-peril national disaster protection scheme – and join the efforts of [all levels of governments] and the public and private sectors,” said Lu.

The UK and US have established their own national public-private models. For instance, set up in 2016, the UK’s Flood Re is a programme with a 25-year shelf life.

As the FT wrote, Flood Re was implemented to act as the impetus for “better flood planning by the government, local authorities and homeowners – so that by 2039, insurance would be more affordable for people in flood-prone areas even without the subsidy.”

China (along with Australia) have asked the UK to share Flood Re’s programme details.

Advancing models
And a significant part of the government’s role is fostering the right environment for advancing technology, analytics and risk models for tackling flood risk — which is tied to data, research and development.

It’s first important to distinguish between the different types of flooding, according to Iain Reynolds, director and head of analytics at Peak Re. Whether caused by typhoon rainfall and/or surge, river flooding or flash flooding, they are “different phenomena” and not necessarily covered by all models; a mix of models/services are provided by commercial vendors, reinsurers, brokers, he says.

Usually, there are a few key hurdles in modelling flood risks in China, including — limited claims statistics and geographic diversity which challenge insurers’ ability to “enhance sophistication in pricing and modelling,” noted Fitch. Another obstacle, Aon’s Lu said, is filtering reliable and relevant data when faced with information overload.

Reynolds added: “In China, as in other countries, it’s often the digital terrain modelling (DTM) that limits the accuracy that can be achieved. Flood modelling is always difficult — and any model is only as good as its weakest component.”

There has been progress, however. State institutions are “constantly improving” in monitoring rainfall and run-off,” noted Reynolds. “The quantity, quality and availability of data is ever-improving — and this ultimately helps [all stakeholders] build better models.”

On the ground, local companies have progressed in their risk appetite and appreciation for flood models, said Lu. New technologies are being utilised for risk assessments — from satellite imagery recognition, to remote sensing and drones.

Fundamentally, a combined approach will serve China well in responding to flood risk — one that sees greater public-private collaboration and the right kind of state support in advancing risk analytics and modelling.