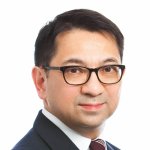 Insurers’ social contributions are important too

Life and non-life insurance revenues worldwide rose to US$4.89 trillion in 2017, with Asia becoming the world’s largest insurance market driven by China, according to Swiss Re.

As a result of these dimensions, some people think insurance companies might be earning too much and the benefits to their clients are limited. But is this really true?

What is often neglected is that insurers create massive wealth and stability for the world. Publishing the “Social return on investment” is starting to become a trend and leading insurance companies are figuring out how to calculate their Social ROIs to demonstrate their positive impacts on society.

According to Management & Excellence, a financial analysis firm in Madrid and New York founded by IE Business School, Social ROI consists of three basic components: first, income multiplication set in motion by benefit payments, salaries and cash flows from investments of the US$24 trillion in assets (12% of the global financial assets) of insurers (IMF, 2016); second, risk reduction which essentially means securing a stable economic context; and third, social asset creation as in raising the competency level of society and thus furthering wealth creation.

Calculations by Management & Excellence, estimate that the annual Social ROI is typically between four times and eight times the revenues of insurance companies, every year.

With insurance accounting for 1.19% of the Chinese GDP, this means that the total financial footprint of insurers in China is closer to 10% of GDP. In the US, the insurance sector insurance sector made up 2.6% of the GDP, which would conceivably entail a Social ROI twice that of China.

This already factors in all costs to society such as premiums paid, aging due to work, and even such factors as the value of the time lost in filling out insurance forms and contracts.

The main value driver of Social ROI is the huge infusion of benefit payments annually. In the US, insurance companies paid out an average of US$63 in benefits per capita in 2016. This injection of cash into the economy acts as a powerful economic stimulus, driving consumption and growth in all sectors.

For Hong Kong, these benefit payments totaled HK$15.46 billion in 2017, with HK$7.6 billion going for accident and health claims. Accident claims, for example, mean that a damaged car will have to be repaired. These repairs involve parts and wages of employees repairing the car.

The purchased parts sustain the parts sector and its employees. All companies and persons involved in this sample value chain pay taxes, which in part flow into infrastructure projects and which in turn generate more jobs and production related efficiencies. A new railway line, for example, allows more people to reach business centers, creating more jobs, real estate and saves workers time in which they can spend money buying things.

While these benefits are obvious, they have not been quantified in a single Social ROI number per company or sector. The main benefit of this Social ROI number is in image development for insurance companies. Clients and stakeholders prefer working with “good” companies, thus driving their business.

Based on these estimated multiples, the Social ROIs in billions of US dollars generated by the top Chinese insurers (Forbes, 2018) would be as the table below indicates. It is important to note, however, that Social ROI is an exact number, not a general multiple such as ROE or ROA.

it is based on a highly detailed analysis of hundreds of macro and micro economic data, ranging from how much a customer spends on his car or for food every year to the impact of aging on productivity. It normally requires one to two months to calculate the first time.

Generally, it is a mathematical certainty that the positive financial returns of an insurance company for society will increase at a faster pace and greater extent than the costs to society.

The below numbers are general Social ROI ranges. The actual Social ROI of these companies may or may not fall within this range. In any case, the precise Social ROI will be a specific financial number, which will increase year for year.

Usually it is a mathematical certainty that the positive financial returns of an insurance company for society will increase at a faster pace and greater extent than the costs to society, which this below chart illustrates. T1-T3 illustrates a timeline, called the social value chain, along which financial returns and costs occur. 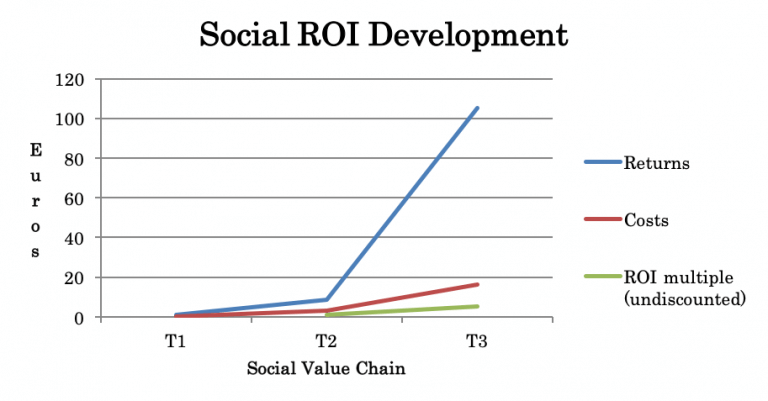 Yet generating returns for society is only half of the Social ROI story. The other is risk reduction. M&E also estimates that insurers contribute 50-100 bps to the national risk, of course, depending on the country and its economic structure. Premiums act as regular economic stimuli, thus reducing economic volatility. They also advance business creation and protect against sudden poverty and reduce illness rates in companies.

The third and final part of social ROI is the residual assets it creates. These include such assets as a more qualified and healthy population. Employees (2.6 million in the US in 2016) and agents in the insurance business acquire knowledge and skills each year they work, which allows many of them to generate higher levels of income for their sector and pay more taxes.

According to Moore Stephens Hong Kong, today’s investors recognise contributions to the sustainable development of a society as a key driver of value. Social ROI helps investors to understand how a company or a sector positively impact the society quantitatively and provide references for investment decisions.

This contribution was written by Patrick Rozario, managing director, Moore Stephens Advisory Services Hong Kong, and William Cox, chief executive, Management & Excellence. Rozario is a graduate of Queen’s University in Canada and a Fellow of Certified Practising Accountants of Australia. Cox received his PhD from the London School of Economics and has a graduate degree in finance from Oxford University.