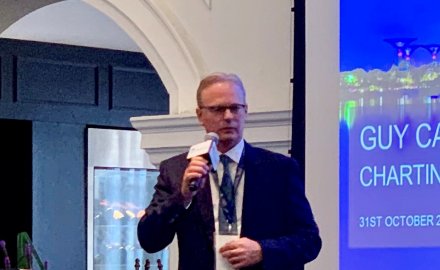 The reinsurance broker held a high level market overview at the Singapore Cricket Club on the fringes of the SIRC 2019.

After being welcomed by Tony Gallagher, chief executive – Asia Pacific region, Guy Carpenter, James Nash, chief executive – international, Guy Carpenter told the audience last week: “While the global economic situation is looking more uncertain, you are lucky to be in Asia. Europe is stagnating, rates are easing again and capital inflows have slowed – we are not going to see more capital enter the market.”

With the Forbes list of most powerful people showing Xi Jinping, president of China, is the most powerful person in the world and Russia’s president Vladimir Putin is the second, while US president Donald Trump is third – there is a sense that the tectonic plates of global politics are shifting.

Political and economic turbulence in Europe through the likes of Brexit and a rise in populism is making it harder for businesses to plan; meanwhile Christine Lagarde has just started as president of the European Central Bank.

It is a changing global risk landscape with the potential of another crisis. Nash (pictured) said: “There are storm clouds out there and financial crises tend to manifest every 10 years.”

Guy Carpenter believes that despite the turbulence, there are still plenty of opportunities, but that the market needs to innovate now to close the insurance gap.

Nash commented: “The insurance gap is becoming more about intangible assets. The market has been less good at moving with that change. The market stopped innovating for a number of years during which time the world has changed dramatically.”

“The market should be looking at covering risks such as cyber, brand theft, non-damage business interruption, reputational damage, design theft and patent litigation.”

While new risks are opportunities, they also present serious threats.

He added: “Cyber premiums are growing at 20% a year; and without a doubt we will have a [major] cyber event – insurers, reinsurers and governments will need to work closely to mitigate this.”

On the plus side – pricing has been on a recent upward trend.

He said: “After a long period of decline, insurance prices are going up – up 8% in Q3 2019 and up every quarter since Q4 2017 – driven by insurers losing money on complex risks not because of lack of capital – we have seen very significant inflation in underlying claims.”

However, while the recent trend may have been up, over around the last decade – pricing has been on a downward spiral.

“There are areas of market where there are bubbles but we don’t see a rapid deflating – we see a flight to quality and we see an evolution of the alternative capital marketplace. We need to see more collaboration among market participants to make it a better place.”

Nash noted as he was speaking California was burning heavily and the market was still discovering the loss impact from Typhoon Faxai and Typhoon Hagibis in Japan.