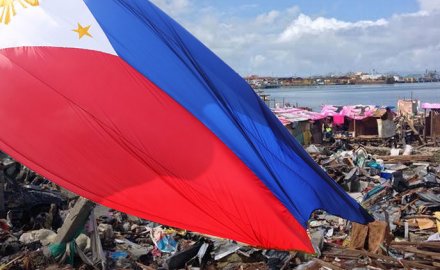 The deal represents the first cat bond listed on an Asian exchange and the first to be sponsored by an Asian sovereign. The bonds finance up to US$225 million of protection against three years of typhoon and earthquake risks, and will form an additional layer of disaster relief for the catastrophe-prone country.

Between 1995 and 2015, the UN reports that the Philippines endured a total of 274 natural disasters, including earthquakes, volcanic eruptions, tropical cyclones and floods, making it the fourth most disaster-prone country in the world.

“The World Bank cat bond is a vital building block to our long-term disaster risk and insurance strategy, which we have been steadily establishing since the aftermath of Typhoon Ketsana and Parma in 2009,” said Rosalia de Leon, national treasurer of the Philippines.

Those two typhoons struck the Philippines within the space of a week, killing hundreds of people and causing hundreds of millions of dollars of damage. Four years later, Typhoon Haiyan underscored the urgency of the problem when it became the strongest storm to ever make landfall, devastating the city of Tacloban.

The World Bank cat bond is only intended to pay in the event of a catastrophe on this scale, with the aim of providing rapid liquidity to the government to support emergency response and maintain essential services until additional resources are available.

A typhoon would have to cause a loss of at least Ps40.64 billion (US$800 million) to meet the threshold for a minimum payout. Such events are very rare in the Philippines, with Haiyan the only historical typhoon loss that meets the requirement, according to AIR’s post-event loss calculations detailed in the prospectus.

Haiyan would have qualified for a payout of up to US$52.5 million, or 35% of the bond’s principal. In the earthquake record, only the 1990 Luzon event would have generated a payout, again at the minimum 35% threshold.

Pricing
Bookrunners GC Securities and Swiss Re Capital Markets had initially talked about raising as much as US$300 million, but scaled back the size of the deal after meeting investors. That looks to have been a good call given that the deal ended up pricing in the middle of the marketed range.

Getting the deal away in the current market environment is a good achievement. Roughly half of the cat bonds that have come to market this year have had to price at the most generous end of the guidance — or even above it in some cases.

The net proceeds from the sale will be used by the International Bank for Reconstruction and Development to finance sustainable development projects and programmes in member countries.

Sullivan & Cromwell and Linklaters advised the underwriters on the deal, and Munich Re was a joint manager alongside GC and Swiss Re.

Resilience
For the Philippines, the bonds will supplement existing disaster financing measures, including contingent credit lines and a US$390 million parametric insurance policy renewed in January this year, which provides cover for national government assets against earthquakes and severe typhoons, and protection against severe typhoons for 25 provinces.

“We hope the listing of this first cat bond on an Asian exchange will pave the way for the development of such insurance-linked securities in Asia.” Loh Boon Chye, Singapore Exchange

The deal is also a feather in the cap for Singapore, which has been developing its ILS capability during the past few years.

“We hope the listing of this first cat bond on an Asian exchange will pave the way for the development of such insurance-linked securities in Asia, which will provide investors globally with another avenue for portfolio diversification,” said Loh Boon Chye, chief executive of Singapore Exchange.

However, the cost and effort of listing on a stock exchange is no longer the only option for potential cat bond issuers. Just last week, Aon Securities launched a private placement cat bond platform for deals above US$25 million, which promises to offer faster and cheaper access to the capital markets.

And in another step for improved disaster resilience in South-East Asia, Indonesia this week agreed a US$770 million deal with insurers and reinsurers in the country, protecting state assets against natural and manmade perils. The deal is part of a new strategy announced a year ago that could eventually include the issuance of an Indonesia cat bond.

While recent catastrophe losses have dampened some of the enthusiasm among capital market investors, the World Bank and the Philippines have demonstrated that disaster-prone Asian countries can nevertheless access this source of funding to provide relief in the critical moments after a disaster strikes; and that is a welcome development.