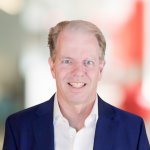 Asia-Pacific’s insurance market is on the cusp of a boom – one that will create enormous opportunities for insurers, provided they understand that the rules of engagement in the region are rapidly changing.

Demographics and economics tell the story. In China, India and South East Asia, households are accumulating wealth, and the middle class is expanding. Total household wealth in the region is set to outstrip the US by 2023, according to projections by Credit Suisse. In the same time frame, the number of middle-class households will reach 109 million in mainland China and 83 million in India, according to Euromonitor (see Figure 1). 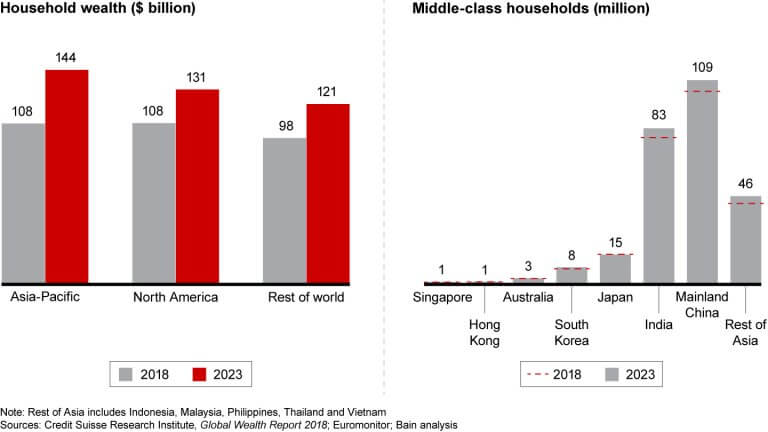 These trends point to more people buying more insurance. As consumers become wealthier, they purchase more big-ticket items such as homes, cars and motorcycles – all of which need to be insured. As living standards improve, so does access to medical care, spurring demand for health insurance. In many parts of Asia-Pacific, people are living longer, fueling the need for life insurance and the related savings products that can help preserve family wealth for the next generation.

By most measures, Asians are drastically underinsured – and they have a lot of catching up to do.

One indicator of insurance penetration, gross written premiums as a percentage of per-capita GDP, signals considerable unmet demand in Asia-Pacific’s developing markets. Penetration is less than 5% in India, Indonesia, mainland China and Malaysia, far below the rates in more developed markets. Data from other markets shows that insurance purchases can increase dramatically as per-capita GDP rises (see Figure 2). 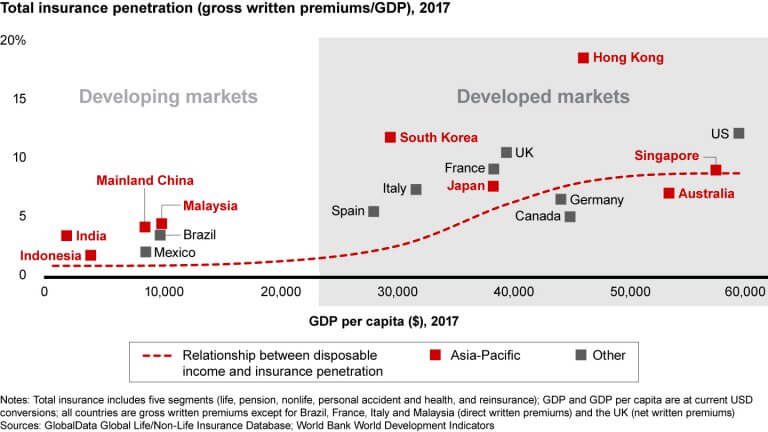 Multinational insurers eager to profit from Asia-Pacific’s insurance boom can get a boost from deregulation. In April 2018, China announced the gradual lifting of restrictions on foreign insurers, allowing companies that are 100% foreign-owned to operate in the country. In India, reforms launched in 2015 have lifted the ceiling on foreign ownership from 26% to 49%.

Given the tremendous growth in China, India and many of Asia-Pacific’s other developing markets, multinational insurers may be tempted to pursue a significant position in all of them. The logic goes like this: This is a hot market, it’s growing fast, profit margins are attractive, and if we want to succeed in the region, we need to be there.

But such an approach can become a recipe for failure. Different markets have different characteristics and needs, and companies that feel compelled to over-customise their strategies for individual Asia-Pacific markets often end up with high costs and few regional synergies. Insurers that prosper in the region will develop a repeatable formula for success, venturing only into those markets that align with their core strengths.

Digital first
Multinational insurers must also be ready to compete in a distribution landscape that is being upended by innovative, digital-first competitors. Digital marketplaces, which allow customers to easily compare and select policies from competing carriers, threaten to take a sizable share of the insurance profit pool from established players.

One way incumbents can fight back is by creating, or joining ecosystems. Chinese insurers are leading the way. Ping An, for example, operates Good Doctor, a one-stop healthcare ecosystem with more than 50 million active users per month. Good Doctor’s services include treatment by family physicians, advice on healthy living and personal health management tools.

Asia-Pacific’s nascent insurance boom, like the region itself, is big, sprawling and diverse. Insurers that profit from it will develop a repeatable formula broad enough to play to their core strengths and specific enough to work in selected markets. They’ll deliver quality at competitive prices through a variety of channels, with a growing emphasis on digital. And they’ll position themselves at the center of an ecosystem of services that meets their customers’ evolving needs.

The article was contributed by Henrik Naujoks and Harshveer Singh, both partners with Bain & Company’s Financial Services practice. Naujoks is based in Hong Kong and Singh in Singapore. 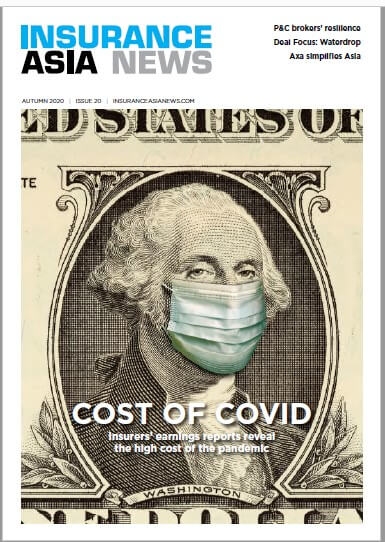