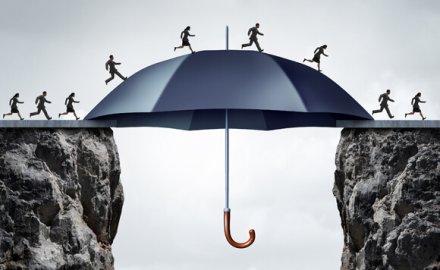 With traditional (re)insurance capital under increasing threat from business interruption (BI) risks, capital market investors have been picking through documentation to see if losses could leak across to catastrophe bonds.

On the face of it, BI risk from Covid-19 should not be an eligible peril for most cat bonds, but investors have long worried about the indirect exposures that could be captured under “other perils” — wording that appears in some cat bond programmes.

Even if the risk is low, the scale of BI losses is enough to get the attention of investors. Could a sponsor argue that Covid-19 is a natural peril? Who gets to decide if an event is a covered catastrophe?

“If cat bonds are to become a larger part of institutional investor allocations, the industry needs to tackle ambiguity around the inclusion of ‘other perils’.” Florian Steiger, Twelve Capital

Florian Steiger, lead portfolio manager for cat bonds at Twelve Capital in Zurich, is one of the investors who has worried about such questions.

After Twelve’s legal team reviewed roughly 200 programmes, they concluded that the cat bond market faces very limited exposure from pandemic-related BI claims. In fact, it could be set to benefit. But Steiger still sees room for improvement.

“If cat bonds are to become a larger part of institutional investor allocations, the industry needs to tackle ambiguity around the inclusion of ‘other perils’ by including only defined perils or through referring to independent third-party definitions,” he says. “Investors need to know exactly what coverage is included and want to have a specific list of inclusions rather than a list of exclusions.”

Market discipline is the ultimate protection. There may be leeway in some rare cases for an opportunistic sponsor to try to recover Covid-19 losses from their cat bond programme, but the resistance from investors would make it difficult (or expensive) to access the market in future.

Lawsuits
Policyholders in the traditional market have no such incentive and legal actions against insurers that are denying BI claims are advancing quickly, raising the prospect of significant losses.

In the UK, the Financial Conduct Authority is pursuing a test case in the High Court against a representative sample of insurers that aims to resolve some of the key contractual uncertainties. The result of the case will be legally binding and could open the floodgates for actions against companies such as Hiscox.

In Australia, lawyers representing policyholders are finding that BI wording often relies on exclusions that refer to an act that was repealed in 2015 — an oversight that could end up costing billions.

“Who doesn’t want to earn 7% with no fundamental correlation to financial markets right now?”

But such losses could favour cat bond investors, says Steiger, just as the losses of the past three years have favoured them. Absent the complaints about “other perils”, standardised structuring and robust legal documentation mean that cat bonds have performed well even as the traditional market has seen its capital depleted or trapped.

The result is that dedicated cat bond investors have enjoyed rising reinsurance pricing as pure upside. Since the Atlantic hurricanes of 2017, cat bonds are yielding 100 to 200 basis points more.

And the market dislocation caused by Covid-19 has already helped spreads move wider after unknown investors sold large volumes of cat bonds in March, driving prices down and yields up. Indeed, the asset class is becoming such an obvious buy that Steiger expects “tourist money” to start flowing in.

“Should the spread widening continue, which we also expect in primary markets, we could start to see money flowing into cat bonds from new investor types, such as hedge funds or high-yield funds, as the relative value of the asset class increases further,” he says.

Indeed, who doesn’t want to earn 7% with no fundamental correlation to financial markets right now?

Cedants
This attractive dynamic doesn’t only favour investors. With the traditional market potentially coming under stress, Steiger says that cedants in Asia that have not traditionally sought to issue cat bonds might want to consider it as an option.

Of course, investors are always happy to see more supply. Whether they are willing to buy is a different matter, but with increasingly supportive legal frameworks in Singapore and Hong Kong, we may well see more Asian cedants take Steiger up on the suggestion.